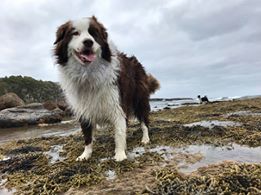 Charlie is a 7yo Border Collie who has had a short stride through both hind legs for most of his life. Charlie’s first episode of lameness was when he was 8 months old and they have been intermittent ever since. At two years old Charlie had a minor tear in his left knee which healed. In April this year Charlie saw a specialist about his knee who confirmed it was muscular and arthritis. He also has arthritis in his left hip. The specialist noted that Charlie was one of the “ most tense dogs” he had tried to exam. Acupuncture has also been tried but unfortunately it wasn’t successful as Charlie wouldn’t relax enough.

Before the first treatment, Charlie had been resting with short leash walks only. The lameness has been improving however there was still a noticeable limp and short stride through both rear legs, more pronounceable on the left with any increase in tempo from a slow walk. Charlie also stood with a short stance, back feet relatively forward with his low back flexed. 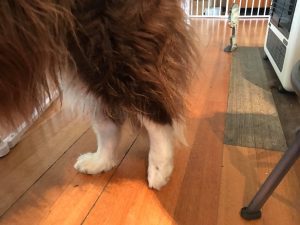 Charlie was very nervous to start so initially we just got to know each other. Mum also had a steady supply of treats which helped and we were outside in an open space.

Assessment revealed that Charlie was flexed through the lumbar spine (low back) and he didn’t like hip extension bilaterally. There was also a lot of muscle tension through the left gluts, adductors, and both psoas (hip flexors).

Treatment was aimed at improving hip extension by loosening the tight muscles around the hip joints as well as the muscles between the left knee and hip. Articulation (gentle movements) was also applied to the lumbar spine to try and encourage movement and a more neutral standing posture. Treatment was only what Charlie would let me do and once he had enough he’d let me know. To be honest, I thought he was really well behaved.

Charlie has been doing really well with treatment. Standing posture has improved and Charlie is moving better through the rear end and weight bearing evenly. Walks have been encouraging a little more hip extension with the introduction of gentle hills.