Daysie is 11yrs old. She competed in agility achieving her AAD, SAAD, RAGD. AATD, RAJD, RAAD, RMAAD, and RAAC. Daysie retired at 10yrs old. She has some wear and tear through her shoulders and more recently had been having an issue with limping through the front left leg.

Daysie had visited her Vet as well as having acupuncture and manual treatment from a TCM animal practitioner in South West Sydney. They had thought her left leg limp was due to her lower neck.

Daysie didn’t much like going to the Vets or treatments in general. On my first visit I was told by her owner that I’d be lucky to get her to let me touch her. I saw this as a bit of a challenge and it’s also part of why I love treating dogs. 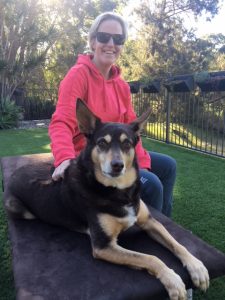 Daysie and I had lots of cuddles to start and mum kept her busy with food too. Examination revealed nothing remarkable through her front limbs. She had decreased mobility through her lower neck but a more marked decrease in her upper back. She was also very tight in her brachiocephalic and sternocephalic muscles on her left side as well as her pectoral muscles. Basically the front of her neck and chest were really tight.

Treatment was aimed at reducing the muscle tightness around the neck and shoulder / chest, as well as gentle articulation through the neck and mid back. I was surprised how much Daysie let me do to be honest.

After the first treatment I had reports that Daysie went a bit “spaz” that evening. For no better word Daysie was making sure the pillow (I think it was a pillow) was safe and if she could have shaken the feathers out she would have. Zoomies were also on the cards. It was almost like she was testing out her new body.

On the second visit it was surprising to see how much Daysies posture had changed. I hadn’t really noticed it in the first treatment but she was holding her head a lot higher this time. She could actually extending into her upper back to hold her head up. Daysie still had a limp but she was moving better and her behaviour was more “playful / younger”.

I’ve seen Daysie a few more times and shes going so well. She still has a bit of a limp but she’s moving so much freer through her left shoulder and neck / back. She’s been more outgoing at Noseworks and she’s pretty chill during treatment.